Originally the Durban Jewish Circle founded by Sol Moshal and other communal leaders in 1919, the organization was reconstituted as the Durban Communal Council and later became the Council of Natal Jewry in 1933. It was originally formed as a “permanent all-representative Council for the community”.

Most South African Jews today trace their origins to the arrival of East European immigrants, a high proportion of whom originated from Lithuania, during the late 1800s. During the 1930s, there was a further influx from Germany as a result of Nazi persecution.

The Jewish connection to Durban goes back to the very beginning of the city’s establishment. One of the founders of Port Natal, Durban’s original name, was the famed trader and explorer Nathaniel Isaacs, who came as a youth in 1825. The city’s first Jewish congregation was established in 1883, followed by the first synagogue a year later in 1884. 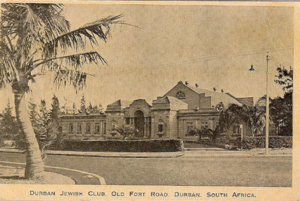