WHAT IS OUR MISSION?

The mission of the CKNJ is to safeguard, to unite, and to represent the entire Jewish community of KwaZulu-Natal.

The CKNJ represents and supports all Jews in our province. We protect the religious and civil rights of the Jewish community in cases of anti-Semitism and hate speech, and aim to promote harmony within the Jewish community as well as with other cultural and religious groups. The CKNJ recognizes and supports the importance of countering all forms of racial, ethnic, gender, or religious prejudice and discrimination.

Based at the Durban Jewish Centre, the CKNJ finds itself both literally and figuratively at the hub of Jewish activity. The Centre is a meeting place for many of the Jewish organizations, as well as venue for smachot (such as weddings and bar- and bat-mitzvahs), business conferences, and communal cultural functions. The CKNJ aims to act as a support mechanism for the Jewish community as a whole, offering assistance and guidance where needed and acting as the official face of the community.

The CKNJ is a proud steward of the KZN Jewish community. We are an affiliate of and have representation on the South African Jewish Board of Deputies (SAJBD), the central representative institution of the national Jewish community. We uphold their values and as such aim to promote the creative continuity and enhance the quality of Jewish life in the province in accordance with the moral and ethical teachings of Judaism. The CKNJ also acts a liaison for the Jewish Community in all matters affecting its relationship with municipal, provincial, or national government.

The CKNJ is active in a continual range of both short and long term projects that improve the lives of our provinces disadvantaged communities. Espousing the values of Tikkun Olam (literally “repairing the world”), we are proud of the disproportionate contribution to the people of our province (just 1200 families in a population of millions). The CKNJ coordinates and supports development and welfare activities focusing on HIV/AIDs, education, and upliftment, many of which are detailed in this brochure. 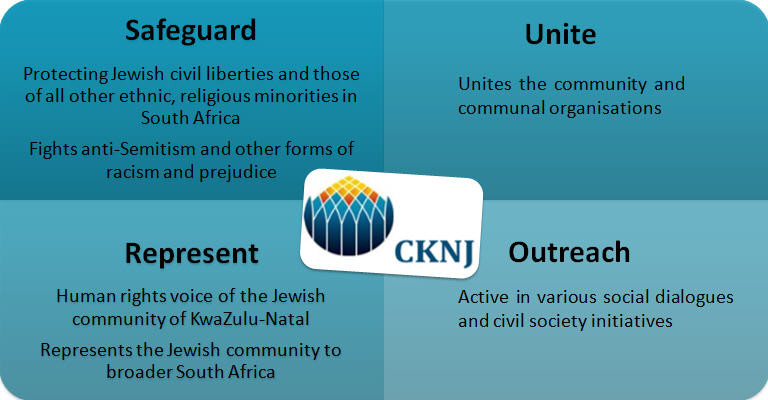